And yet; another review! I love going to museums, especially if visiting them requires a long trip far away from home: really! And this museum, for me, was exactly what I like: a very nice museum far away from home. Well; at least: more than 3 hours of traveling from home.

Museum MORE is a museum on modern realism, which also is my own painting style. And yes; I like watching paintings in my style.

If you have read my previous reviews, you know I like to travel by public transport. (Especially this day, on the 31st of March, since you could travel for free by train if you obtained the gift book you got when you bought a dutch book, during the national book week.) But,… the nearest train station (Deventer) was still almost 8 kilometres from the museum. So you had to take the bus. A bus which runs only once an hour. And after exiting the bus, you still needed to walk at least 200 metres to the museum. It is reachable by public transport: it could be worse, but it definately could be better too,..

That said; we weren’t the only ones with the idea to visit museum MORE. When we arrived at the Deventer train station, we had to que, alongside a lot of elderly people, for the bus. We realized soon enough that most of the people in the bus were heading to the MORE museum. I had not expected to get in such a crowd, visiting a museum in the middle of nowhere. But; since one of the exhibitions was linked to a Dutch TV-show, I probably should not be surprised. 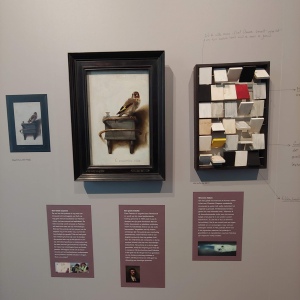 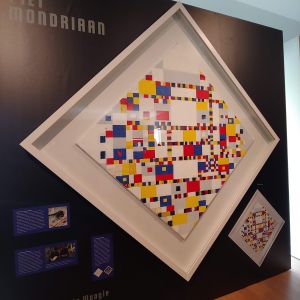 I made a lot of pictures! A lot! The museum held three exhibits, the first we visited was the one that was linked to the Dutch tv-show het geheim van de meester. This translates as ‘the master’s secret’ and is about reconstructing famous artworks. In every show, artist Charlotte Caspers recreates a famous painting. She’s done that for three series of shows, so now there were some 22 artworks to exhibit. Her reconstructions are awesome. During the tv-show you can follow the whole process on reconstructing, and you learn a lot about the original artist and the painting she recreated. The show has one central aim: they want to discover how the master created his / her work of art.

I especially liked het puttertje, from C. Fabritius. I liked how Charlotte created a colourmap before she started the reconstruction. The colourmap was made on small wooden panels, and was hung next to the painting. On the colourmap you mainly see whites / greyes, just like in the painting.

Another interesting reconstruction was the victory boogie woogie by Mondriaan. The crew of the tv-show actually didn’t want to do this one, because it is an extremely complicated work of art. For them, it was no surprise that there remained some visible differences between the original and the reconstruction. And yes: I could see the differences too, but I found it hard to understand why this painting was so difficult to recreate. They said, it was because Mondriaan never was transparent on how he created this piece. And of course; Charlotte and her collegues not only want a reconstruction that lóóks like the original, but they want to use the same materials and want the artwork to have the same characteristics. And I guess they couldn’t do that with this work. 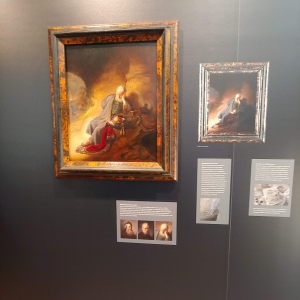 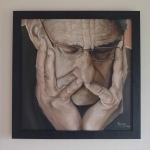 I particularly liked the reconstruction of Jeremia which is Rembrandt’s work. Not only because I like Rembrandt a lot, or because I love the composition, or the colors, or the way Rembrandt portrayed the story of Jeremia. I also liked it, because it was my inspiration for my our Jeremia painting. (I squeezed in a photo of my painting, hope you like it) I made our Jeremia to compete in the art contest, which was connected to this exhibition. For the contest; you had to make an artwork which was inspired by one of the 22 reconstructions of the tv-show. If I won; my painting would be in the exhibition. I hope you can see how I got inspired by Rembrandt’s way to tell the story. I zoomed in on a portrait of father Frans van der Lugt, who was mourning over the ruins of his city: Homs. Rembrandt zoomed out on a portrait of Jeremia who mourned over the ruins of Jeruzalem.

The winner of this contest was inspired by the still life with asparagus, by Adriaen Coorte. She painted a box of sardines in the same fragile colors as the asparagus was painted. Yes: the colors are very good. Yes: the composition is very good, and yes: the idea was great. But I didn’t quite got the impression that the painting was finished. It lacked the details, the painting of Adriaen Coorte does have. The asparagus are painted with such precision, eye for detail and lightening, and that’s exactly why it is great. I just prefer still lifes which are painted hyper realistic, and well: the winning painting was not hyper realistic at all; really. 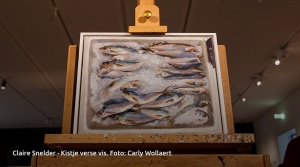 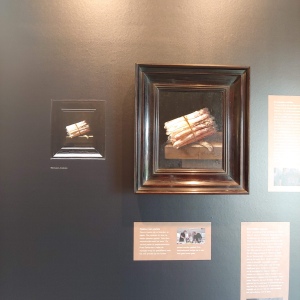 Of course there were more exhibits. 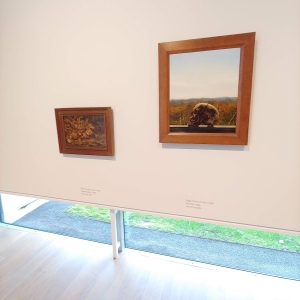 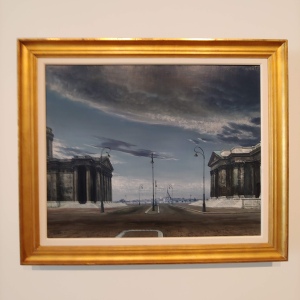 In the semi-permanent collection of contemporary art, the museum made cross sections to link different paintings. They paired paintings who had an ’empty feel’, or paintings of natural decay. I made a picture of the series on natural decay. Both paintings are from Edgar Fernhout. I like how Fernhout made something so beautiful, out of such a thing as decay or death. The orange colors are great. Fernhout makes you love these, otherwise, such depressing scenes. I also love the detail Fernhout puts in his paintings. I sure wish to know more about this artist.

Kenne Grégoire made a still life with flowers. I just had to take a picture of it and share it in this blog, because I really like the blue, and the composition. I like how he makes you look through a round window, while the canvas is a square, and how he enhances the 3D effect by letting the flower and the cloth break through the round frame. Your eyes first are drawn to the round and square shapes, and the blue color, only after that you’ll see how amazing all the details are painted. I love it!

Also from the semi-permanent collection is the painting of a city square by Carel Willink. This painting was in a series on emptiness. You can tell why. It is surreal, and I really like the clouds and the details in the buildings. Take a look at the painting. Don’t you get a surreal feeling from it? Crazy, right? Like getting back on earth after the apocalyps.

The third, and last exhibit was also a temporary one. It was an exhibition on the paintings of the four brothers Barraud. They lived in Switzerland in the early 20th century. And yes; I found a lot of their paintings very interesting. For example, this very small portrait by François Barraud. I don’t know why the portrait is accompanied by two naked ladies, but this makes it a very interesting little work of art. 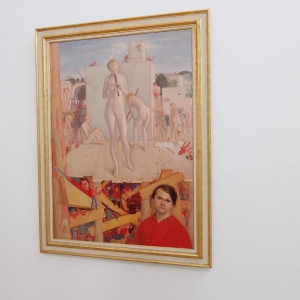 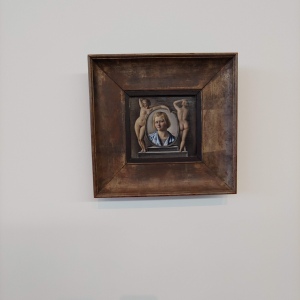 But his brother, Auréle Barraud also did a great job by painting the builders. It was the least realistic work of this exhibit. I thought it rather gave me a surreal feel; not only because of the man in front of the composition, but also because of all the workers underneath the stage. On the stage, some kind of performance takes place: a few huge naked ladies making music? Interesting piece of work.

I rated the learning part: 3 out of 5. If you want to learn something about a particular artist; like the Barraud brothers, you are very well catered for. The museum gave enough information on the Barraud brothers. I, for example, learned that François was the most productive painter; he painted four paintings per month. François however, died at an early age, he only was 35 years old! That’s even too young to add a tribute to him in my dying project, because the deceased person should at least have made it to 37 to be in the project. (You can read about my dying project here.)

There was less information on the other brothers. I only remembered that Auréle Barraud was not able to produce as many paintings as François.

Also a three out of five. I mainly got inspired by Arnout Killian. He makes huge paintings of everyday, frozen images. Not only frozen in the sense that there’s no movement, but with the word frozen, I also would like to refer to an icely tone in the paintings. They seem stilled. Actually, just like Carel Willink’s city square (see the ‘interesting works of art’ I discussed earlier), but in Killian’s paintings are less objects. It just is a perfect, zoomed in, picture of one object. With smooth lines and detailed effects, he creates a tension in the painting, just by using a divergent perspective. It is like magic, and I love the tension in the painting. That’s something I would like to learn. So it’s a good thing Killian is still alive and living and working in Amsterdam. Maybe I could join a workshop by him. 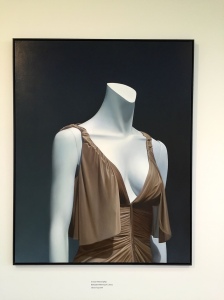 Accessible for the disabled

There’s an elevator in the building. There are no small passages, because it is a very modern building. I rated the accessibility a four out of five, because of the crowds. It was actually too busy for someone in a wheelchair. And in the geheim van de meester exhibit, some objects were horizontally displayed at about 120 cm. That would be too high for someone in a wheelchair.

They were busy. Very busy. You could tell there usually aren’t so many visitors. But they still were friendly.

Take the kids with you

I, again, didn’t take any children with me. But,.. the website of the museum told me they had a very nice, so called, kids guide. It sounded fun. So I think I would recommand it! 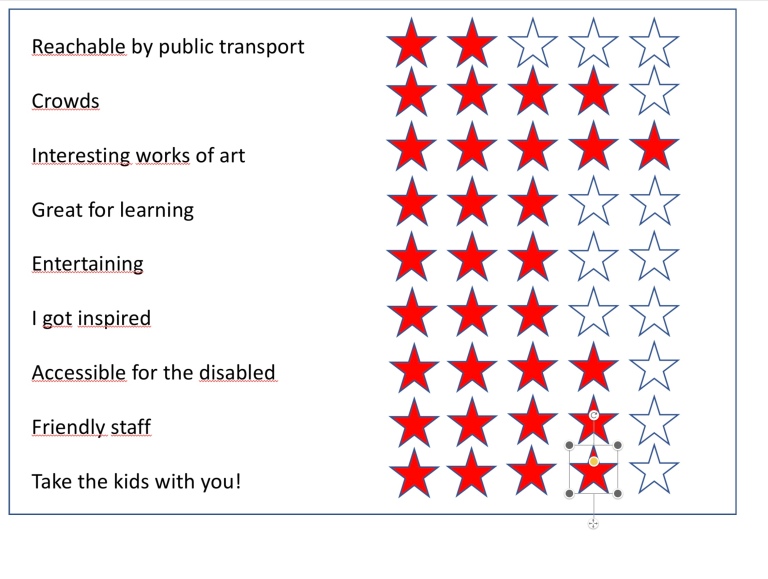